Ecommerce market share in the United Kingdom worth €153 billion

Ecommerce in the United Kingdom worth 153 billion euros or 133 billion pounds during year 2016. This means that there was 16 percent growth of the industry compared to previous, 2015 year. For comparison, when consumers spent 132 billion euros online with English retailers. This growth was partly due to an increased popularity of mobile mcommerce. 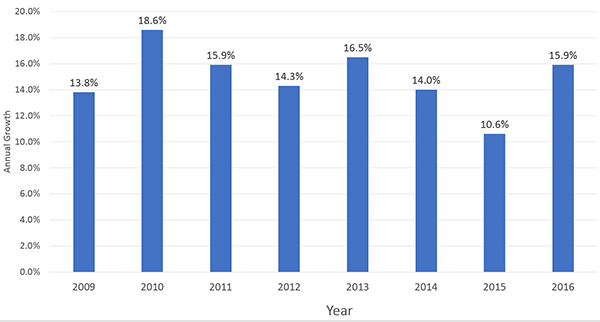 As shown by the latest figures from the IMRG Capgemini eRetail Sales Index, companies predicted the ecommerce industry in the UK should grow 11% during 2016, but it happened to be even more: 16%. As of IMRG view, the results demonstrate an exception performance for online retail in the UK. IMRG by the way thinks this industry will grow even further by 14% in 2017.

When looking at the product categories, it shows that online sales of accessories increased the most (38%), followed by lingerie (33%) and gifts (26%). But, the health and beauty sector had a year to forget, with online sales in the category 3% during 2016

IQ Direct Inc. can offer you brilliant ecommerce solutions, such as writing custom software for ecommerce, Salesforce integration, Channeladvisor extensions and others.